From insult to inspiration

Finland has always been a pioneer in gender equality in politics. The first country in Europe to give women the vote. The tiny northern country that was living “the feminist dream”. So when Finland formed a new government that was young and lead by women – all in their thirties – the photograph of new prime minister’s coalition quickly made the headlines around the globe.

But even in Finland, the battle for equality isn’t over. According to study by Plan International, more than half of girls surveyed, from around the world, have been harassed and abused online. One in four girls abused online feels physically unsafe as a result.

Online violence towards female politicians is a huge challenge for democracy and equality. It aims to silence their voices and scare them off. It has the power to belittle, demean, intimidate and eventually silence women. One of the ways to belittle is using the word “girl” as an insult.

In this case, the mockery culminated in photo manipulation where Finnish female leaders were altered to look like young children. Image included the headline “girls playing government.” Starting from Reddit the photo started to circulate in Finnish social media sites, in context to mock politicians being females. 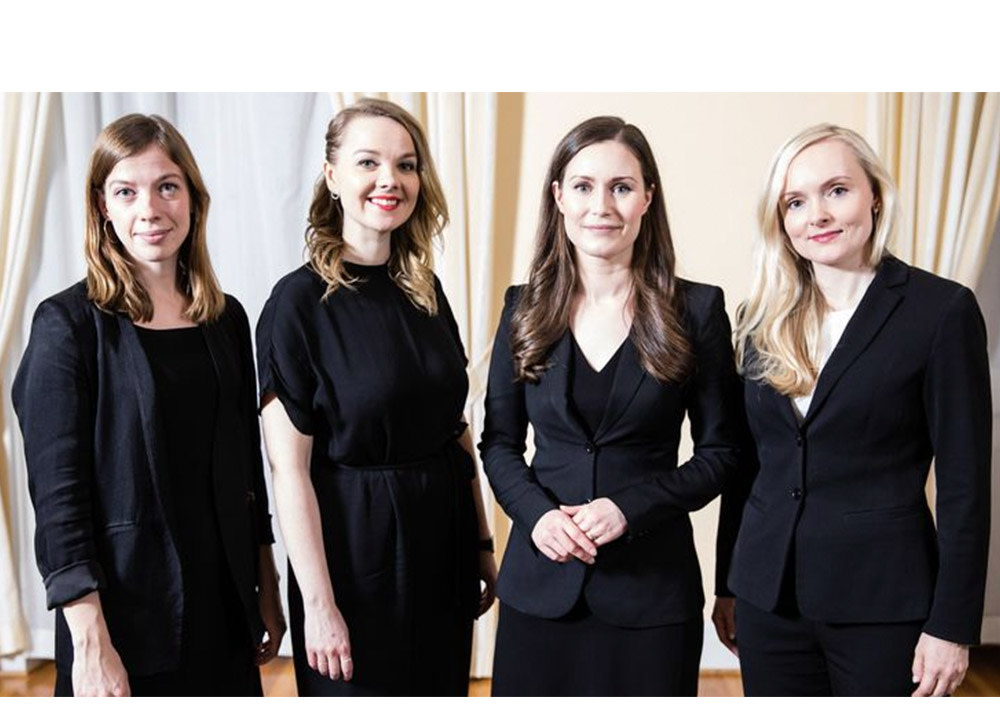 Our quick reaction turned the mockery into an opportunity

To make the world better for girls, we need to stand against all harassment and actively be vocal against it. And inspire others to take a stand with us.

hasan & partners contacted Plan with a ready idea to turn the insult into inspiration. We helped Plan stand up for bullies and turn their hateful message around to empower girls, not demean them. We provided Plan with social media content sharing the picture rebranded to showcase the opportunities a country committed to equality offers all children no matter their gender. The “What do you see here – Insult or inspiration” tweet was shared and retweeted to the point where it even caught the attention of our Prime Minister – who then in turn retweeted without any encouragement from us or Plan.

Not only did Plan gain significant social media attention, but the topic was also picked up by the news.  In one day this insult turned into inspiration reached the people, decision-makers and influencers, making Plan’s message be heard all over Finland. 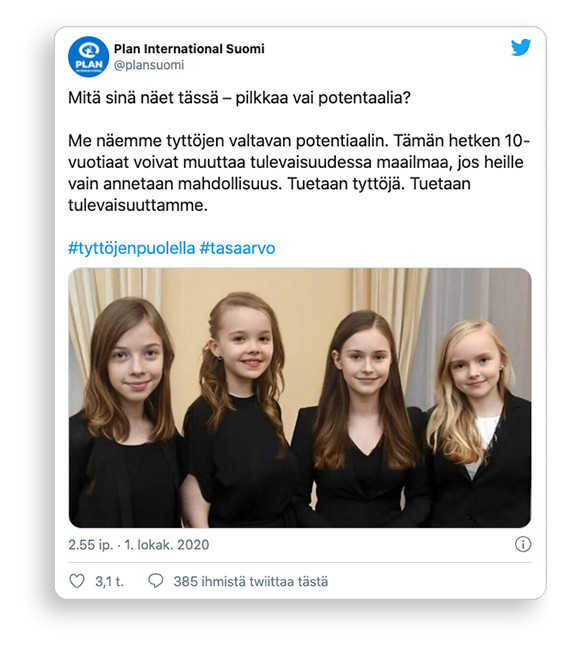 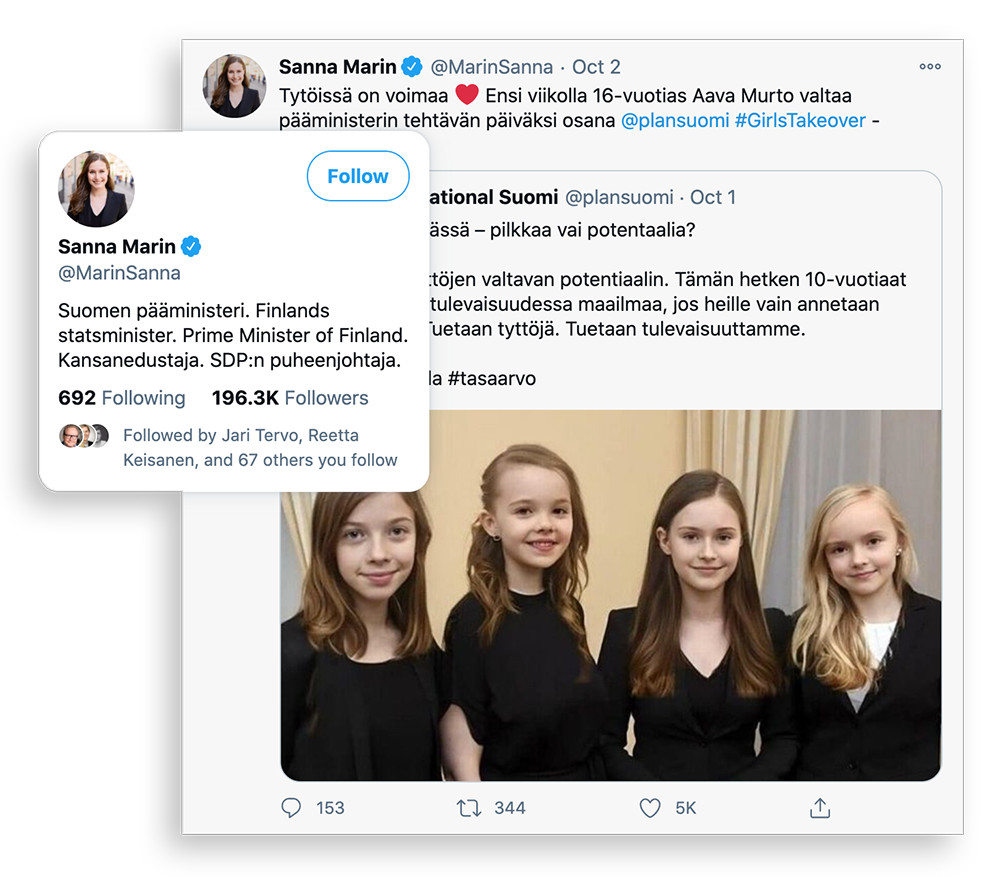 From toxic initiative to impactful positivity and inspiration

We managed to turn toxic initiative into positivity and inspiration. Plan International Finland took a stand against hate, chauvinism and online violence. And that paid off: their act inspired people to show their support and be vocal against in-equality.

The single tweet was viewed over 177 000 times and re-tweeded hundreds of times. That is spectacular for a tiny organisation in a small country, where Twitter has only 300 000 monthly active users. Re-tweeters included e.g. prime minister of Finland and other powerful politicians, media personas and influencers. 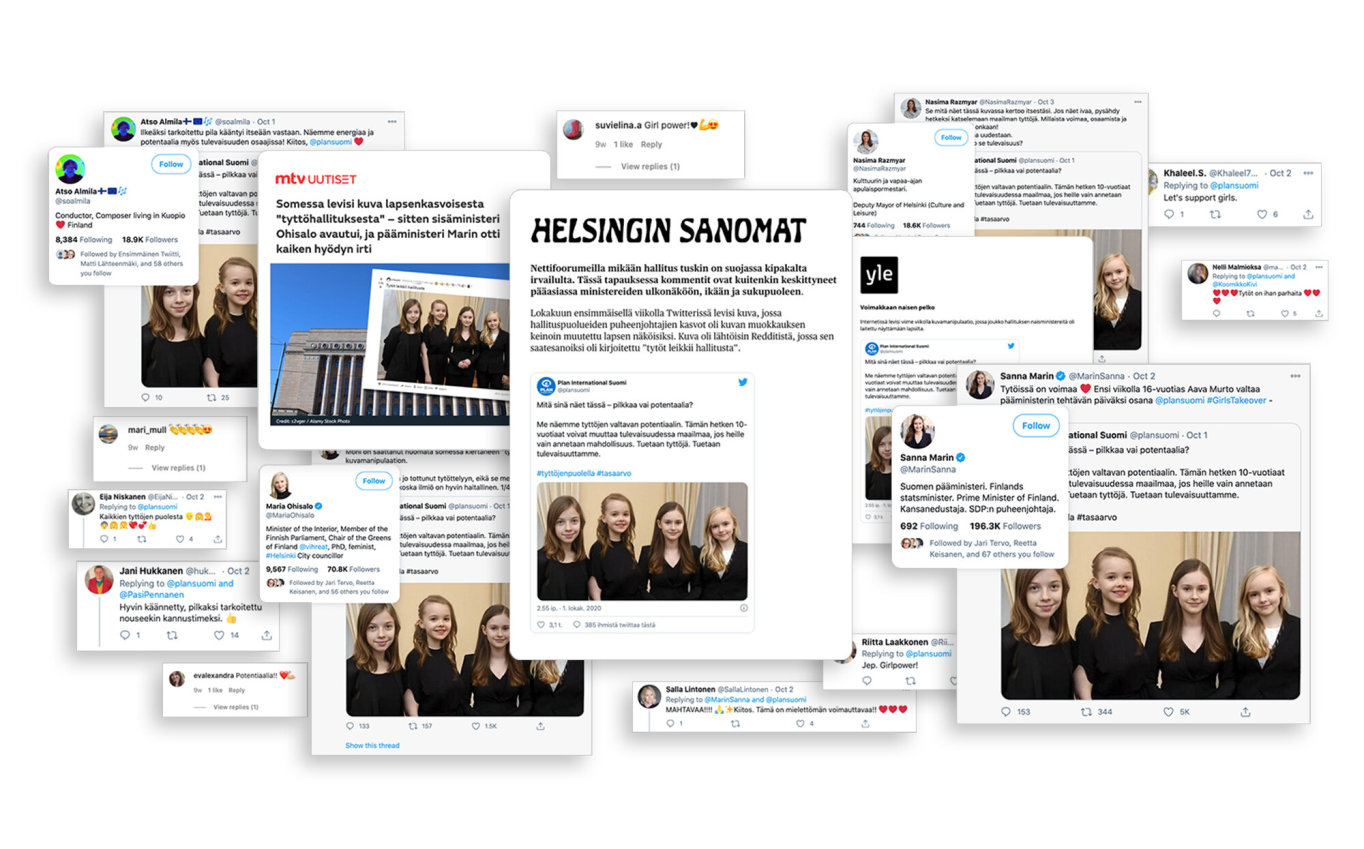